I finally found the elusive Freschetta Gluten Free Pizza at the Sunnyvale Safeway at 150 East  El Camino Real across from Sprouts, next to Toys R Us . My local store did not carry it - I guess it's too small - I also just checked the Los Altos store on Miramonte Ave and it too did not carry this item. 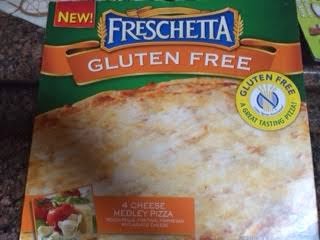 If you have been following my blog, you will recall my husband and I are absolute pizza snobs. I grew up in NY and he grew up in Chicago. We have extremely high expectations when it comes to pizza. Well, I am happy to report that we both really enjoyed this pizza! It was not quite as good as the pizza I make with the Venice seasoned crust and Edan Organic's Pizza sauce, but it was pretty close. I decided to cook the pizza on the baking stone so I would have a true apples to apples comparison to what I make. So I heated the stone to 450 degrees F, then when up to heat reduced the oven to 425 degrees F. The instructions said to cook the pizza 12 to 18 minutes but I found I really only needed to heat it for 10 minutes. The crust was crispy and sauce was tangy - I think the pizza could have used a little bit more sauce but it was still enough sauce that I could taste the tanginess and felt the texture of sauce between the crust and cheese. There was plenty of cheese and it stayed with the pizza as we ate it. (I hate when all the pizza comes off in your teeth after the first bite.) Even the Giggler enjoyed it and gobbled up the crust which she usually offers to me. (Yes, I was disappointed that she did not offer me any crust - one large pizza was not quite enough for the 3 of us even though we also had salad and brussels sprouts).

At a whopping $10.99 per pie it's probably the most I've ever paid for a frozen pizza (and gluten free food is expensive!) but I figured I already pay $6-7 per frozen crust at Venice Bakery so in the grand scheme of things, it's not too expensive although $8.99 felt like a better price point for me. I could not find mention of this pizza at the Freschetta web site but did see a mention on their Facebook page that this is rolling out to limited markets. I sure hope this is not a trial but that this is a product which will be available for years to come.

Freschetta was definitely better than many of the gluten free pizzas we've had at restaurants including Amici's, Willow Street Pizza and Blue Line. I hope Safeway expands stock to my local store and if not, I guess I will start frequenting this location more often.